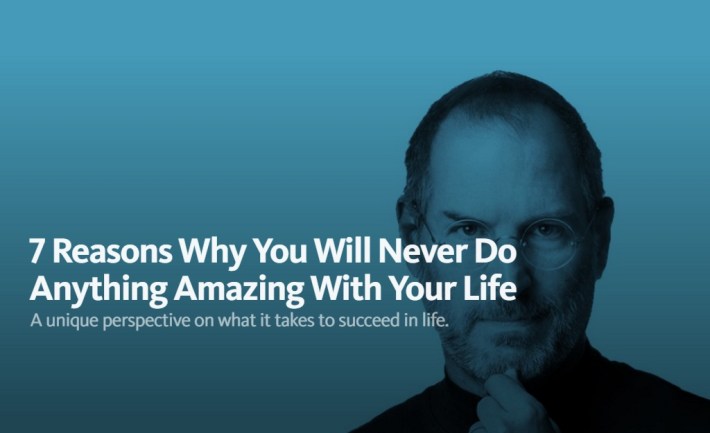 Yeah that’s right; you heard me… I’m talking to you… I’m calling you out.

I’m looking you in the eyes, (ok well, not really since you are probably reading this article, but figuratively, I am burning a cyclops type hole in your face right now) and telling you that you don’t stand a chance.

I’m telling you that if you can read this article, look through this list and not claim it as your own, then you should be a little worried.

Got it? Now repeat that until you come to your senses and continue reading whenever you’re ready.

I’m not even talking about the: slack-off, skip class, smoke weed, drink and party but still graduate, skill-set your $50,000+ diploma has lead you to believe you have.

“I’m talking ’bout, step out your door, make some moves, and get-some-shit-done, kind of skills! Some, move out your mama’s house, quit your job — say “fuck the world” — and then actually go do it, kind of skills”.

The kind of skills you develop in the real world, outside the bubble of your parents protection or the ideological indoctrination that has overwhelmed our entire educational system.

Skills that can be had by anyone willing to pay the price to get them. Skills that are quickly becoming extinct.

I’m talking about skills that cannot be taught in a classroom or in a textbook. Skills you can only learn by doing; by learning how to fly after jumping off the cliff.

Skills that can only be developed when you find your true self. When you put yourself on the line or otherwise expose yourself to the possibility of failure.

The skills you can only develop when you are willing to risk it all in order to do that one amazing thing.

Skills that up until now, you thought you had.

“Basically, what I am trying to tell you is that, in this game called life, you don’t stand a chance…

1 :: Because You Have Not Failed Enough

Because you are comfortable in your mediocrity; because you choose not to try.

Because it is easier to talk about learning that new (programming?) language as opposed to actually learning it.

Because you think everything is too hard or too complicated so you will just “sit this one out”, or maybe you’ll, “do-it-tomorrow”!

Because you hate your job but won’t get a new one; because it is easy to reject rejection.

Because while you’re sitting around failing to try, I am out there trying to fail, challenging myself, learning new things and failing as fast as possible.

Because as I fail, I learn, and then adjust my course to make sure my path is always forward. Like the process of annealing steel, I’ve been through the fire and pounded into shape. The shape of a sword with polished edges and a razor sharp blade that will cut you in half if you are not equally hardened.

2 :: Because You Care What Others Think About You

Because you have to fit in.

Because you believe that being different is only cool if you’re different in the same way that other people are different.

Because you are afraid to embrace your true self for fear of how the world will see you. You think that because you judge others, this means that those people must, in-turn, be judging you.

Because you care more about the stuff you have as opposed to the things you’ve done.

Because while you’re out spending your money on new outfits, new cars, overpriced meals or nights at the bar, I’ll be investing in myself. And while you try to fit in with the world I’ll make the world fit in with me.

Because I will recklessly abandon all insecurities and expose my true self to the world. I will become immune to the impact of your opinion and stand naked in a crowd of ideas; comfortable in knowing that while you married the mundane I explored the exceptional.

3 :: Because You Think You Are Smarter Than You Are

Because you did what everyone else did; you studied what they studied and read what they read.

Because you learned what you had to learn in order to pass their tests and you think that makes you smart.

Because you think learning is only something people do in schools.

Because while you were away at college, I was studying life; because instead of learning about the world in a classroom I went out and learned it by living.

Because I know more than any piece of paper you could ever frame from a university. Because smart is not what you learn, it’s how you live.

Because I might not have a degree but I challenge you to find a topic that I can’t talk to you about cohesively.

Because I could pass your tests if I had to, but you couldn’t stand for a single second in the face of the tests that life has thrown me. Tests that are not graded on a bell curve or by percentages; tests that are graded by one simple stipulation: survival!

Because you read the things you are required to read or nothing at all.

Because you think history is boring and philosophy is stupid.

Because you would rather sit and watch “E!” or “MTV” instead of exploring something new, instead of diving head first, into the brain of another man in an attempt to better understand the world around you.

Because you refuse to acknowledge that all the power in the world comes from the words of those that lived before us. That anything you desire can be had by searching through the multitude of words that are available to us now more abundantly than ever before.

Because you are probably not reading this article even though you know you should.

Because the people that are reading this already know these things.

Because you can lead a horse to water but you can’t make him drink.

5 :: Because You Lack Curiosity

Because you get your news from copy-cat members of the state-controlled media.

Because you are unwilling to ask this simple question… “What if it’s all a lie?”, and accept the possibility that maybe it is; that just maybe, the methods of mass media are under direct orders to: keep you distracted.

Because you call me a know-it-all but refuse to call yourself a know-nothing-at-all.

Because I thirst for knowledge, regardless the topic.

Because while you’re busy playing Candy Crush, or Megalopolis, I am reading about string theory and quantum mechanics.

Because while you waste your time with Tosh.o I am learning how to edit video, build websites and design mobile apps.

Because if we were to go heads-up in a debate, I would crush you. I would make it a point to defeat my own argument; from every imaginable angle; in order to understand everything you might be able to use against me.

Because I would dedicate myself to understanding both sides of the argument so thoroughly that I could argue your side for you and win; even after having just handed you a defeat in the same debate.

6 :: Because You Don’t Ask Enough Questions

Because you do not question authority.

Because you don’t question yourself.

Because you don’t understand the power of properly placed questioning in life, respectful disagreements and standing up for what you know to be right in the face of someone telling you otherwise. Unable to question reality; stuck in a self imposed survival strategy within a matrix-style monotony.

Because I know that you will give me all the information I need to destroy you by letting you talk.

Because I study human behaviors and you ignore everyone but yourself.

Because I watch how you say the things you say just as closely as I listen to what you say; and you say way too much!

Because control comes, not from spewing your ignorance like some incurable case of logorrhea, but from properly structuring the context of your questions.

Because I study the premise of your argument and destroy it from the ground level before you even get a chance to establish your ideas.

7 :: Because You Can’t Handle The Truth

Because you refuse to admit that you don’t even know the things you don’t know.

Because there isn’t an article online that would make up for all the time you have wasted in life.

Because even if I told you everything could be different tomorrow you would wait until then to begin doing anything about it.

Because even when you think I’m not, I’m aware of my surroundings.

Because you think that since I have not acknowledged you, it means that I have not seen you.

Because, you walk around with your head up your ass, oblivious to the world around you. Blissfully ignorant of the reality that sits so close to your face that if you stuck your tongue out, just once, you would taste it and realize how delicious the truth actually is.

Because you would become an instant addict. Unable to pull yourself from the teat of truth. Finally able to understand your lack of understanding, and then you would see; then you would know that the only thing holding you back from doing something truly amazing, is you.